Hidden volume asks to be formatted every time

I started to configure my new 32 GB storage follwing the instructions given via /start.
After the initial setup - during which I had to format a 27 GB partition, and which resulted in 2 drives, one with 2 GB and a second one with 27 GB - I proceeded with the instructions given in the FAQ at Applications | Nitrokey. So I started to setup the hidden volume by using the setup window, starting at 20%, ending at 90%. After some seconds, I got the message that setup is done.

Does someone know what is going wrong here? Did I anything wrong in the sequence? Or did I miss something?

EDIT:
When I use the storage on another PC, I can’t see the hidden volume. So far everything seems to be OK (I can see it as unformatted device only). But why am I asked to format the hidden volume every time I press the unlock hidden volume link in the nitro key app?

Help is much appreciated - Thanks! 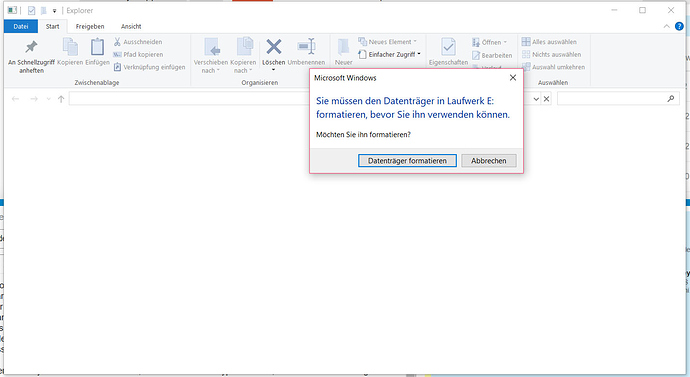 It is a good idea to disallow Windows to auto-mount devices as well. This is good from a security perspective in general, but for work with Nitrokey and hidden volume as well (as the encrypted volume will not be mounted in the first place).

Thanks for your reply. Unfortunately, I think I still don’t get it.

I set up the hidden volume by using the app (config > setup hidden volume), and after that I tried to access the volume. Windows wanted to format it, and I did so (27 GB). I then had access to the volume. After that, I went back to the app and pressed “unlock hidden volume”. This resulted in the volume appearing unformatted again in my windows explorer. (But when I’m asked to format it again, the volume appears with 20 GB instead of 27 GB). Maybe I simply don’t understand what the button “unlock hidden volume” in the app means, and that I’m confused with the number of volumes that appear when setting up the storage:

(1) I have a partition with 1,99 GB which appeared when I first used the stick
(2) After encrypting, I had another drive with avout 27 GB.

Is (1) also encrypted, or is (2) the encrypted drive which everything refers to?

(3) But why do I loose (access to) the volume (2) after I set it up and pressed the “unlock hidden volume?” button in the app?

no problems at all.

The first partition you see (1) is just an unencrypted part of the Storage and is 2G. It is always available unencrypted so that you have a Storage for not sensitive data. There are several every day use cases where one is not able to unlock the encrypted partition/hidden volume (for example if you want to print something in your copy shop’s printer).

Does this clarify the situation?

Thanks a lot, this claryfies things for me.
And it worked now as it should.