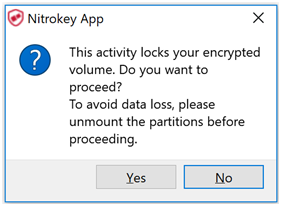 How do I unmount it first on Windows?

it works as follows: right-click on the Device in “Computer” and choose “safely unmount” or alike (or use systemtray).

It will fail if a operation is still in progress. Therefore you should complete this procedure before locking device, to make sure it is not in use anymore. Otherwise you may lost some data.

Hi Alex,
You marked it solved but it is not.
In Windows 10 (and 7) there is no “safely unmount” but only “Eject”. When you right-click and then choose Eject or in the system tray choose “Savely Remove Hardware and Eject Media” and then “Eject Nitrokey”, Nitrokey is not visible in the Windows Explorer any more (no surprise after ejecting) and as a consequence you CANNOT lock the Nitrokey any more!
Because of that the message in the window I posted in my question is misleading. It implies that you first need to unmount and then you can lock without loosing data. Or what do you imply with “before proceeding” - proceeding with what? 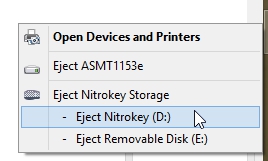 If I choose Eject Nitrokey (D:) in system tray or in Windows Explorer nothing happens! Now what?

I do not understand, what you mean, nothing happened? What do you expect to happen.

Please note the explanation of @szszszsz here. The mount/unmount feature is in the standard way Microsoft decided to handle things. If I unmount my NK on my Arch Linux system I can remount it afterwards. On Microsoft Windows indeed pendrives often disappear after ejecting. This have nothing to do with the locking of the device as this is handled by the Nitrokey App and happens on the device itself.

Ah… and please note that the window you attached above will be there even if the device was actually ejected by you. So this is no warning of kind “you did not …”, but a warning that will appear always to make sure you remember to eject.

I hope I could clarify.

I think @Dada meant that after choosing the option menu and opening it once again the volumes (unencrypted/encrypted) are still being shown. The device is inserting its volumes after ejection (hence it is still listed), but the synchronization operation on OS side has been done successfully (otherwise a proper message would be shown). After that please lock the volume / device with Nitrokey App.
This behaviour was lately introduced to Storage firmware (after v0.46). While this is a side-effect of some other fix, it is not considered as a bug (yet).